Chirality and Why It's Important

Although many of you will not have come across the word “chirality” or “chiral” you are more likely to know a definition of isomerism. The definition we will use for isomers is: “compounds composed of the same elements in the same proportions, and having the same molecular weight, but forming different substances, with different properties”

Work through the activities below to learn more about chirality and where it occurs in the world around us.

An Introduction to Chirality

There are different types of isomerism:

1) Structural – two molecules which have the same molecular formula, but different structural formulae, i.e. the atoms are joined to each other differently

2) Stereo – molecules with the same molecular formula and structural formula, but the atoms are arranged differently in space. Two types of stereoisomerism are:

There are many places where isomerism is important in nature e.g. in sight. Here we find that the chemical found in the rods and cones of our eyes, retinal, can have cis and trans isomers and it is the inter-conversion between these which allows us to detect light:

Figure 1. The conversion of the cis isomer, A, to the trans isomer, B, occurs when the chemical is exposed to light. This triggers messages to be passed to the brain, allowing us to "see"

You will see from figure 1 that there is no other change in the molecule. It is only the change of one double bond from cis to trans!

A double bond is composed of one sigma bond and one pi bond. For a sigma bond it doesn’t matter if the atoms at the end of the molecule rotate as this makes no difference to the overlap of the orbitals making up this bond. When we compare this to a pi bond we can see that there is a big difference due to the way the orbitals now overlap in a side-on rather than an end-on fashion. This side on overlap means that if we twist one of the atoms which are making up the bond, but leave the other where it is, our orbitals will no longer overlap, our bond will be broken.

If you find it hard to imagine this, get yourself some round balloons. You will need two colours, e.g. red and blue. Blow up two balloons of the first colour, red, these are your s orbitals. Blow up 4 balloons of the second colour, blue. Tie these blue balloons together in pairs to make your p orbitals. There are now four ways you can overlap your “orbitals”

1) Hold the tied bits (imagine this is the nucleus of your atom) of the two red balloons (s orbitals), pointing the other ends towards each other. This represents a sigma bond formed from two s orbitals, and rotation will not affect the bond. Twist one balloon and you will see it makes no difference.

3) Hold two p orbitals and point a lobe of each towards each other. Again, this represents a sigma bond this time formed from two p orbitals. Rotation will not affect the bond.

4) This one is different! Take your two p orbitals and overlap them in a side on fashion, i.e. with both lobes on each orbital overlapping with the other orbital. This is a pi bond. Now try rotating one hand (and therefore one orbital), you will see that immediately the bond is broken. )

It is also important, and interesting, to note that different geometrical isomers, despite only having this one bond different, have different physical properties:

Question: Can you think of why these differences might come about? (HINT: Think about the types of intermolecular forces there might be present, and how strong these might be)

Chirality is another form of isomerism. Chiral isomers are non-superimposable mirror images of each other, i.e. they are the same molecules with one of them being what you would see if you looked at a reflection of the other. Non-superimposable means that you cannot put them on top of each other with all of the atoms overlapping correctly. 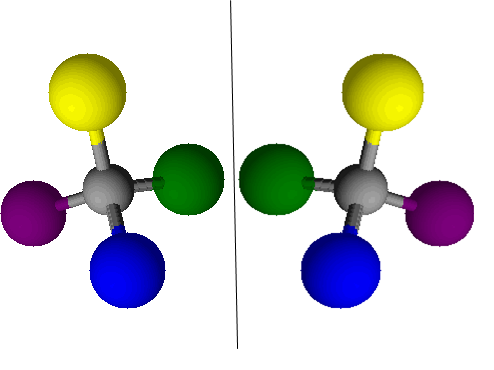 Figure 2. A molecule and its reflection, which would be a chiral isomer of the first molecule

Try making models of two chiral substances – use a bit of plastercine for the central atom and then use cocktail sticks to make bonds to other atoms which you make from four colours (like in the picture above). Make a second atom with the atoms arranged as the mirror image. Can you superimpose these (this means can you put all of the correct colours on top of each other)? You shouldn’t be able to, so if you can, check to make sure that you have actually made the mirror image.

Chiral objects are found in the world all around us:

Hold your hands out in front of yourself, palms down. Looking at your hands you could imagine a mirror in the centre (I know it won’t be perfect but…); they are reflections of each other. Now try and superimpose them (put them on top of each other), but remember every part has to be lined up correctly. Although you can get your middle fingers to overlap without turning one of your hands over, you’ll find that your thumb on one hand overlaps with your little finger on the other.

This activity looks at chiral molecules and the example of amino acids.

This activity takes you through the rules for absolute configuration.