History is the study of the past – pretty simple, eh? But what does that actually mean? Historians examine a range of things, from determining when a specific event took place, to explaining why that event happened; ultimately we attempt to understand how historical societies worked. But before we can do any of this, we have to begin by assessing our sources. To what extent are they biased? How reliable are they? If a source contains mistakes does that make it completely useless? Perhaps even more importantly, we must recognise that all sources have limitations and that sometimes we don’t have enough information to discover everything that we want to about the past.

This is particularly relevant when it comes to Ancient History, since we often have much less information than we do for more recent periods of history. In the activities below, you will encounter four sources which deal with the same period of history. You will explore their strengths and weaknesses, assess their uses and their limitations; finally, you will discover how the questions that we ask have a significant impact on the answers that we find. Hopefully, by the end of the resource, you will have a more sophisticated understanding of what a ‘historical fact’ is and why we have to treat these ‘facts’ carefully.

For almost two millennia before the birth of Christ, the city of Babylon played a major role in world affairs. Situated in the centre of modern-day Iraq, roughly 50 miles from Baghdad, Babylon was, for a time in the first millennium BC, the largest city in the world. The city was famed as a place of learning and it was also the centre of a powerful empire, which controlled much of the surrounding area, stretching as far as the Mediterranean coast of Syria. But, in the middle of the sixth century BC, the primacy of Babylon was threatened by a new power in the East, the Persians. Under Cyrus II, known to us now as Cyrus the Great due to his prowess as a conqueror, the Persians gradually began to carve out a vast Empire. The great kingdoms of the time – first the Median, and then the Lydian – were conquered, and, in 539 BC, Cyrus turned his attention to Babylon. The four texts here are ancient accounts of the ensuing conflict and Cyrus’ victory. Be aware that each source will contain some unfamiliar words. The most important of these are explained in the glossary below, but don’t worry if you see a word you don’t understand – in the main the unusual words are simply names for various things (places, months, gods etc.) in Babylonian and won’t prevent you from understanding the text. 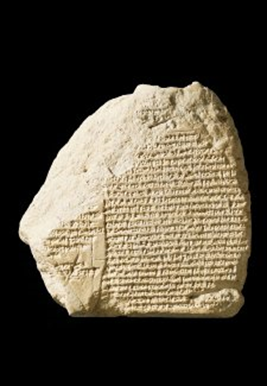 The Nabonidus Chronicle is a cuneiform tablet currently housed in the British Museum. Download this activity to find out more about this source.

The Cyrus Cylinder is a cuneiform cylinder, now housed in the British Museum, and reveals some of Cyrus’ methods. Who was Cyrus? Find out in this activity.

The Verse Account is another Babylonian document which describes the reign of Nabonidus. How is it different to the Nabonidus Chronicle?

The Book of Daniel

After completing the other activities, have a look at this answer sheet and compare your own answers to these model ones.